Organising a Hen’s party can be one of the hardest tasks to manage and most of the time it all comes down to a BUDGET. You always want to make sure the Bride to be has the best night before the big day, but sometimes you can’t do everything you wanted as the costs can add up quickly. But what if there was NO budget? No limit to the amount spent. Lets take a look at how the other side lives. The Hen’s nights of the rich and famous….

The most recent and extravagant wedding, probably of this century, was of course Kim and Kanye’s, so the Hen’s night could not disappoint. And it didn’t! No expense was spared at

Kym’s hens do which was of course held in Paris. Wearing a $20,000 dress, the group dined at the exclusive Hotel Costes before indulging in 15 bottles of Veuve Clicquot champagne that were sent to her room. The girls then went on to tour the Louvre and Eiffel Tower.

Katy Perry’s hens night, which was organized by Rihanna, was a private performance from Cirque Du Soleil in Las Vegas. The girls then went backstage for photos with the performers! Hopefully that made up for her hubby to be (but no longer) Russell Brand being arrested earlier that day!

If it’s wild hen’s nights your after, then Kate Moss does it best!  She had hers 3 weeks before the wedding, obviously needed time to recover from the hangover from drinking 120 bottles of exclusive Mahiki rum at the Isle of Wight rock festival. But that wasn’t enough, she then had 180 more flown in by helicopter! In between they downed bottles of Cristal champagne, Grey Goose vodka and Tanqueray gin. They arrived in 2 Pink Hummers and Kate even organized her own private chef to cook fish and chips! 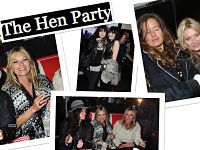 Instant Quote
The Butlers are waiting to serve you! Get a Quote
Sign up to get free party games & latest deals from us
You're currently on our Australia Country Site — click 'Okay' to stay on this country or choose your country below
We use cookies to ensure that we give you the best experience on our website. If you continue to use this site we will assume that you are happy with it.Ok